An early start. Low winds, good visibility. We have to run the engine most of the time, since the sea is dead calm and winds vary between 0 and 3 msec. We pass Hallands Väderö around 1450 UTC and see one seal in the distance with binoculars, hardly any traffic, nice. Several tumlare, small dolphins, cross through our wake behind the boat. Fun to see some life. In the vicinity of Helsingborg we see many more ships. But we are clear of the shipping lane, so no collision courses at all. As we approach Helsingborg, a heavy thunderstorm crosses land right near us, and the winds turn very high and ghusty for a spell. Isabell has no problem with that, especially as we run on the engine. It gets dark before we get to port at Råå, but we have all the nav aids up and running and get into port without any problems. Find a box to park in in
the dark, and now we have good use of the bright deck light in the front of the mast. Unusual to use that during summers in Sweden, since it is light most of the time then. Another day on the sea behind us, we are glad to have found this pearl of the Oresund. 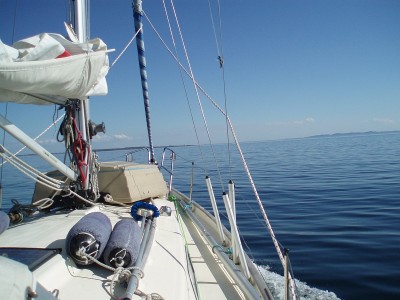