Isabell left port at Simrishamn after having filled diesel and freshwater tanks. Raining at first, winds at 14 msec and a good angle at W-SW. Heaving seas with waves of up to 2 meters make the ride a little rough at first. We have an average speed of 5.5 knots the first three hours, then the wind dies down to 4 msec and our speed is reduced so much that we decide to start the engine for a while. We do not want to come to port in the Karlskrona peninsula after dark. We run at 7 knots for 5 hours, still hardly any wind. No sails set. The waves become smoother after a while and we eat in the middle of the Hanobukten. A little bird circles the boat and tries to perch on the deck for a while, but does not like the noise and flies off. In the evening we run on autopilot and engine and about one hour away from Karlskrona the wind picks up to 5.5 msec so we get all the sail up. Let the engine rest a bit. Nice W-NW winds give us a cruising speed of 5 knots directly to the port of Karlskrona. Not a cloud in the sky. Wonderful. Inside the Karlskrona archipelago it is quiet. We run up the party flags in the top of the mast and go with full sails under the Mocklosund bridge. At 1930 UTC we drop anchor in the bay of Mocklo (position 56* 08.6 N 15* 46.3 E). The end of the trip. Home sweet home! 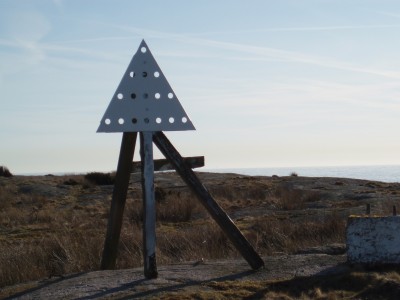