After having read “Alla sa att vi skulle dö” about a couple of young people from the northern parts of Sweden (Kalix and Kiruna) who sailed an Albin Vega around the world between 2007 and 2009, I started to look into the option to sail all the way north in the Baltic and Bay of Bothnia, to the most northern towns of Kemi (Finland) and Haparanda (Sweden). From Stockholm this would be more than 570 NM one-way. Could be fun to get up there again and enjoy 24-hour sunlight for a while. I also found some literature about the Swedish coast harbours in the book “Norrlandskust” by Kryssarklubben. I wil have to try an get hold of the nautical charts from the Finnish coast to the Bothnia Sea and Bay.

Here is a nice map of the route in dark blue!

We’ll see what happens with these dreams! And a detailed sea chart (498 NM) 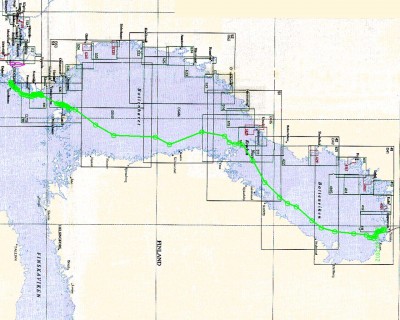