We intend to sail over to Öland from the port of Vändburg. But things do not turn out that way. We have SE wind turning to S and then W. Meaning wind is straight ahead all the time. We have to tack long legs to get ahead. And since the waves and current are heading south as we are, the highest waves ever seen in the Baltic (at least by the skipper) are facing us a stretch just at the southern tip of Gotland. 4 m waves with a very short interval between waves are beating hard. We run with a third of the main sail up and a little piece of the foresail. After 5 hours we head N along the westcoast of Gotland to the port of Burgsvik. We will have another go at it to sail over to Öland another day. In Burgsvik we meet a nice young couple from Stockholm with two young boys on their Friendship boat. The boys (maybe 2 and 4 yrs old) are playing on the deck in their floating vests. The oldest boy ties his younger brother into one of the halyards and winches him up about four meter over the deck, before his dad sticks his head out of the cabin and stops him. They are having a short discussion and the boy is hoisted down on the deck again. What a blast!

Burgsvik is a nice harbour and we go enjoy the beach just inside the stone jetty. It is windy still. Let’s hope it turns back into the right angle tomorrow. 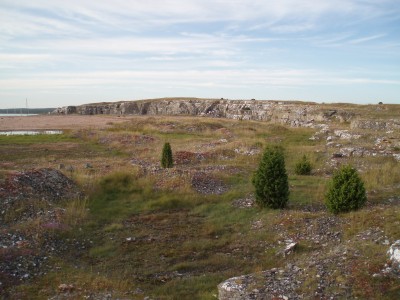