Today I sailed out to meet the Monsun skipper Jerk Oldenburg, with his no. 27 Monsun Vindela. He turned 80 years this winter and is taking it easy now. But still sailing long-range alone. It was great sitting in Vindelas cockpit and chatting with Jerk about all things possible, over a cup of tea/coffee.

Jerk sailed around the World between 1998 and 2007. He wrote a blog along the way, but said he did not feel like writing more on the way back to Sweden, somewhere in the Mediterranean. I used to read his website blog and was not sure if he continued sailing. But he has continued sailing Vindela. This summer he was in the Baltic Sea, Gulf of Riga, and also on Aland. He has sailed Vindela up along the Swedish westcoast, along the Norwegian coast up to the Arctic. Tranported the boat on a trailer truck to Haparanda in Sweden the next spring, and sailed back home along the eastern coast of Sweden the following summer.

Jerk rowed out to me in his dinghy and took over the helm in Isabell to navigate into the very stony and shallow waters around his sons summer house in the Stockholm Archipelago. Thank you Jerk, for some good advice and a very nice afternoon on Vindela.

I hope we meet again. 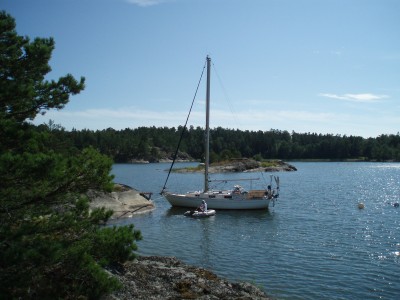