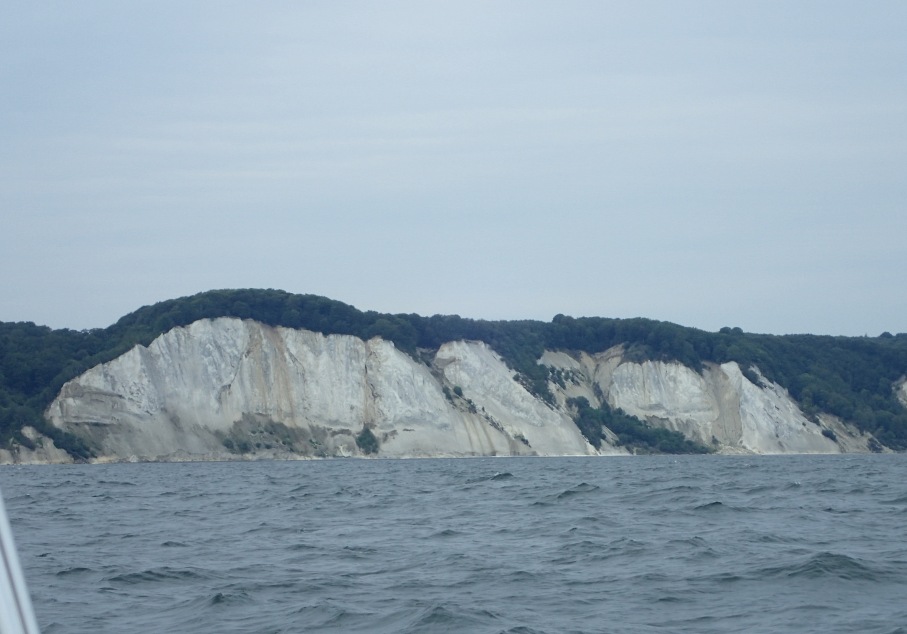 Where am I now? Ystad guest harbor on the Swedish southcoast.

Left Kiel on Tuesday morning. Very little wind, but from the right direction this time. As I am coasting along with all the sails up, I am hailed by the German military police on the VHF. They are having a military operation in the bight between Kiel and Fehmarn. So I am going to have to go a big circle around the area, marked as military training site on the charts. As I am making my way around I see several big naval vessels in the excercise area. They are dropping depth charges, training submarine defence, and it sounds like thunder in the distance. A grey and muggy day of sailing, past the Danish sea border and back into the Fehmarn sound. A few other boats keep me company. Have the radar on to find the buoy markers that I am supposed to keep on my starboard side. Works well. I get to Fehmarn bridge and check in at the same harbor where I was on the way south. The Burger See marina, all new and big, at Burgertiefe. Biked into the town of Burg and dis some shopping. Bought a new chartbook of the Danish waters. Thought that would be smartest, since I had sailed into a dangerous area on the way south. This time going north I could keep clear of the new wind park they are building out there.

On the early morning of Wednesday I motorsailed toward Denmark. Hardly any wind, sunny and still warm. Coming near the Danish coast several coast guard vessels are tracking me close by. I talked to one of the crews and asked if I could go into the Gedser harbour for the night. They needed to have a registration code and personbevis (proof of residence from the Swedish authorities) to go into the harbour. That, of course, I did not have. So I sailed on and anchored in the bight between the islands of Moen and Falster. A bit of a rolling experience, which meant that sleeping was not comfortable, but ok. In the early morning, when I pulled the anchor, the coast guard was there again, following me out. I am sure they had been monitoring me all the time.

So there was wind, first rather nice, and I could get a good bearing on the Swedish coast, all the sails up. After a few hours the wind picked up, and waves started to build up as well. I put a reef in the main and continued. Fast, it went. This is the first time someone set off the alarm on my VHF. I got scared shitless, until I understood what it was. A DSC emergency call. Listening to the Swedish and Danish rescue operators I understood that a Danish vessel was sinking somewhere in Danish waters. It was not close to where I was, so I listened and just sailed on. They where 6 people that had to be rescued. Good to know that rescue is close by when you are in deep shit.

I had to stay very close to the main route for the high speed ferries, and several of them passed real close by. Hailed one of the TT-line vessels, since it came straight at me from behind. But they had seen me and would pass on my port side. They were close enough so I could see folks on the bridge. Waved at them! On it went, the wind picked up even more, but I could maintain my course straight to the harbor of Smygehuk on the south coast of Sweden. Got there swiftly, with very little sail up. The last five miles I handsteered into port. There was a place to tie up in the otherwise deserted harbor.

It rained during the night and temperatures dropped to near 20 degrees C. In the morning I took it easy and looked around the place. Then, with drizzle and a very smooth and grey sea, I motorsailed to the town of Ystad. Coming out of the harbor the sea looked all yellow. First I thought it was silt from the harsh wind yesterday. But no, it was a very heavy growth of cyanobacterial algae. It continued all along the coast, like plowing through pea soup. The sea was empty. Halfway it started to rain again and visibilty was very low. Lights went on, as well as the radar. I found the port of Ystad without too much of an effort. Here, there was plenty of space. Almost deserted in this big marina. I am going to leave Isabell here until Monday. This weekend a near gale wind is going to pass through the area. So I decided to leave it for now, and take the train to visit friends and my son and his family in Malmö during the weekend. On Monday, if the weather allows it, I will continue my journey north. It is still rainy and grey. Nice to sit in the harbor and have a dry warm boat around me. It occurred to me how quickly the sea can alter appearance. From smooth and peaceful to wild and trecherous. Respect! It gave me a sense of security to feel that Isabell can handle the high waves and wind. And I got to practice heavy weather techniques.