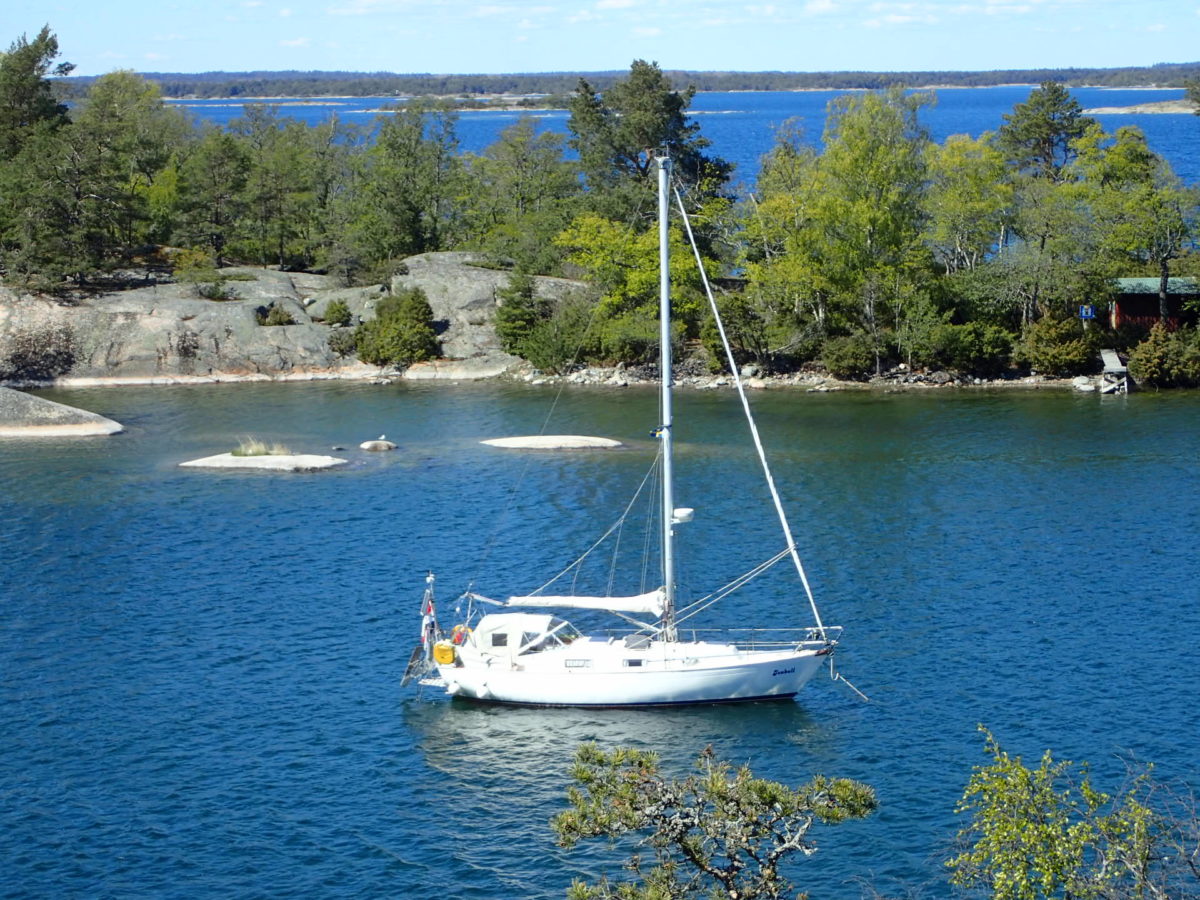 Early yesterday morning I sailed out on the northern part of the Kalmarsund. Since it had been very windy on the Baltic Sea the past few days, a heavy long wave pattern was still running. But the weather was fair and I could sail a few hours with all the sails up. In the vicinity of Oskarshamn the wind died down to almost nothing (4-5 knots) and the heavy sea made going a bit uneasy. So I decided to follow the inside passage through the skerry coastal landscape. It has several beautiful spots, and as usual the water was empty. I hand-navigated most of the way, but progress was good. Saw a few sailboats near Västervik and passed two naval vessels going out to sea. Another two sailboats and a motor yacht in the vicinity of Loftahammar. That’s it. After Loftahammar it started to drizzle, and after a while came the heavy rain, buckets of it. I threw the anchor at a small cove near Kårö and ate, rested a bit and waited for the rain to get past me. Since the following days promised high northerly winds, I decided to use all of the daylight hours to motor northbound. That was a bit of a mistake. I did not get further than where I am now. Near the entrance to the town of Valdemarsvik. And it rained a whole lot more. So in this downpour and closing of darkness I found an anchorage that looked good on the charts, but visibility was too low to see for real. Early this morning I could actually see the surroundings, and I happened to pick a good spot. It gives good enough cover for the hard norhterly wind and has a beautiful natural setting.

So today I took the day off and while the sun is shining I dry out all the wet stuff. Time to download some more pictures to the computer and update my status. The wind situation is not in my advantage the coming days. Only about 120 miles to go, but it will take some time, if I want to enjoy the ride. Luckily, I am still on vacation. Best to enjoy the scenery along this ancient (from the Viking era and onwards) seafarers route through the skerries. The route is well marked and easy to follow, although at times very exposed to the open sea (wind and the sea waves).