Yes, I am going to sail to The Netherlands this summer. The original plan has to be adjusted to better fit the circumstances around locked down Denmark. But it is decided to go for it.

It will be a bit of a challenge to go, and still stick to the most important government recommendations, stay clear of as many people as possible. In Germany some of the ports and harbours are open for transit boating. In The Netherlands ports and harbours are open to national boaters. The facilities are still closed for a while more, but I do not need those. Everything I need is aboard Isabell. Stow as much food and water, and fuel as possible, and GO! 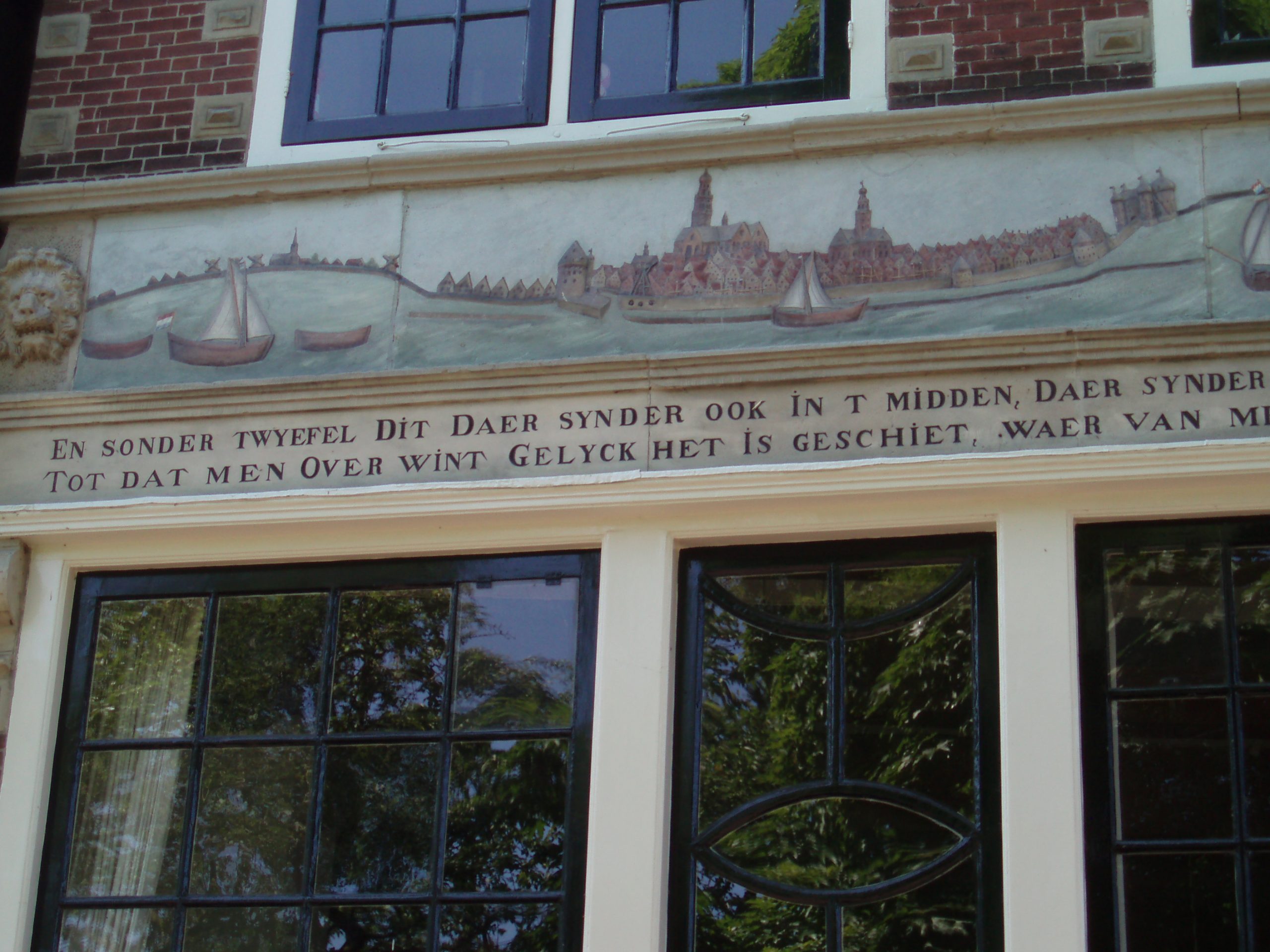 Now I have a few weeks left to prepare. Charts are bought. Food lists, shopping lists and spare parts lists to go over. Carry everything on board. Make arrangements for things at home, and then wait for the right weather to help me get down there. I will keep you posted.

Today, May 27th, the COVID-19 restrictions in the form of total close down of all European ports and marinas for leisure boats, are slowly changing. Now it is only a month before this summers long distance sailing endeavor will begin. The Netherlands and Germany are opening for passing vessels, through the main routes. Although berthing options are still severely restricted, and vessels need to be totally autonomous regarding water and food intake and black water collection, this eases my mind about this summers options.

Denmark is still closed for all foreign vessels. Both Denmark and Finland are now worried about visitors from Sweden, because of the many more deaths due to the virus in Sweden, compared to the rest of the northern European countries. Politics! I am guessing that they will have to lift a little on the current policies, the financial interests of both countries in boat tourism from Swedish visitors is huge.

Well, well, I just continue to prepare boat and myself for the big adventure. Looking forward to meet with the special challenges that this virus adds to the already existing ones on a boat trip to other places in other countries. Keeping my fingers crossed!

Today, May 17 1980, for exactly forty years ago, the first owners of Monsun number 791, then called Amalia, picked her up from the Hallberg Rassy shipyard at Orust, and sailed her home, across Göta Älv and across lake Vättern to Huskvarna, Sweden. They kept her for 15 years, and took good care of both boat and engine.

So many times the question arises about how many things you need to enjoy your boating trip. I would say, the major thing to worry about is the seaworthiness of your vessel. All other stuff is a bonus if you can afford it.
Think of the forces of wind and waves, and make sure your rigging will stand up, no matter what. Reflect over the possibility of not being seen by other vessels. What can you do to improve visibility. Is your boat leaking when it rains, then it might leak worse when at sea, and water is flushing your deck. Fix that.
For all the other stuff, you can possibly do without it and enjoy the ride. The more fancy stuff you invest in, the more things can and will at some point break down. Some people cannot think without the comfort of a 36 inch flatsceen TV, freezer, airco, microwave, and so on. OK, but is it not just being at sea that is fantastic?
From all the fancy stuff that is available on Isabell, the most enjoyed are according to the list below:

About in that order of importance and esteem. All the other stuff is mostly extra luxury. So if you cannot afford to have the comfort of a general luxury apartment on your boat, do not worry about it. Just shove off and go sailing. Make sure your boat stays afloat and in the deep enough parts of the mighty blue.

Isabell went back in the water on Thursday April 23, and the following weekend I sailed her out of Lake Malaren and to the saltwater berth at Bullando Marina. Through the sluices at Hammarby lies the only bridge that I cannot pass without it opening, Danviksbron, was closed, and unmanned. During the summer season it generally is manned and opens by request or at regular hourly intervals. Not! This time I came so early, that it did not open. I had to call the Traffic Service Center at Stockholm Port Authority and request permission for it to open. You can imagine that it took a while. But they were very friendly and sent out a bridge operator on his bike to open the bridge for me. Luckily I had a lot of practical issues to fix with onboard, so time went by fast enough. At last the bridge opened, and I was out in the Baltic Sea. Great! As I was tied up to the dock at the bridge, an elderly man seemed to show a lot of interest in Isabell. He came over and explained that he had seen Isabell before, and wondered where she went. He was another Monsun owner, get this, with a berth at the same marina as Isabell. So funny, the world is full of Monsun owners, and once in a while you get to meet them. Now I know there are at least three Monsuns in the same harbour.

A short update on the summer sailing plans. As the sailing season for our part of the World is soon to begin, I have been checking the international regulations on pleasure crafts entering national waters and seaports. At the moment it seems that it is possible to sail from Sweden to Finland and some of the Baltic states. The authorities will check health conditions aboard when a vessel enters national waters from abroad.
Denmark is not allowing foreign pleasure boats entering Danish ports, as they only allow those who have urgent business in Denmark. Pleasure crafts entering are seen upon as non-urgent visits and thus forbidden.
Germany is closed for all travelers from abroad, even from other Schengen countries.
The Netherlands is closed for foreign visiting yachts.
Norway is closed for foreign visiting yachts.

Look at Noonsite for recent updates on the situation at this page:

It is not looking promising. Let’s hope things will get better soon.

A common question asked is why S/V Isabell is under the flag of The Netherlands, while the boat is registered in Sweden.

The simple answer is that the captain and owner is a citizen of that little country in Western Europe. Although having been a resident in Sweden since 1986, I never changed my country of origin. Isabell is built and registered in Sweden. With a Swedish MMSI and registration, the international rule of thumb is that the operator is responsible to follow the rules and regulations as they are stated by the Swedish law. That is an advantage for me, as I am also in possession of a Swedish naval education and various nautical authorizations.

Nevertheless, besides being a wee bit less proud of the evil history of Dutch colonial behavior, that little nation has a long tradition of seafaring and naval engineering that has set the stage for global boating as we know it today. Many nautical terms are directly copied from the dutch language. And best of all, the proud folks of Zeeland were among the first to circumnavigate the World. Zeeland, today, is still a region with close ties to water and all that the knowledge of water systems encompasses. I was born in Zeeland, from a family with a Zeeland tradition that goes back to the 15th Century. So, besides flying the dutch flag, Isabell usually shows the flag of Zeeland under the port spreader. But Sweden is my home, enjoyed very much the same.

The sailing season of 2020 is coming in sight. Preparations of the boat have commenced. Plans for the summer have started to take form. Even though the COVID-19 virus is setting some sort of “maybe” mode on the 2020 sailing seasons possibilities, it is always fun to go through the possibilities ahead. From behind the desk I have looked into possible routes to sail down south. Amazing, today you can virtually go through any sailing trades and from behind your computer learn the layout of sluices, bridges, shallows and other obstacles that may come in your way. By looking at the sailing video blogs of others, who have made the journey, you can plan how to take an obstacle or how not to do things.
Thinking about the early explorers and their very basic means of navigation, today things seem quite simple. With AIS, plotters, radar, pilot charts, great weather forecasts and so on, you are a fool if things go wrong because of unpreparedness. Still, I am one of those safe sailors that never take things for granted. Always be prepared for the worst, and things will often be easier than you anticipated. The other way around is much less fun, once things go sour.
The first challenge of planning is to find the right sources of information. It is not always possible to prepare for everything. But looking through the lenses of other sailors is fun, and gives a reasonable impression of what is waiting. Here, the floor is scattered with charts, books, and equipment that needs fixing or general maintenance. In short, I am having fun preparing.

Browsing through the Internet I found some great information about the routes through The Netherlands with a sailboat with the mast still standing (max height for passing is 38 m above water level). In English it can be found here: Blue Heeler HR 39. Highly recommended.
For information about bridges, sluices and opening times you can check on Varen doe je samen (in English).
It is highly recommended to get the dutch Staande Mast Atlas, a set of waterway charts with a lot of useful information. But it is difficult to buy outside of the Netherlands.
This route takes you through the waterways from the very northeast to the southwest of the country. The vessel depth allowed in the main channels is down to 2.5 m. Some sections of the route are covered in convoy. The canals through Amsterdam are only navigated night-time due to the bridges only opening after 02.00 hrs local time.
The route is divided in a northern section through the provinces of Groningen and Friesland down to the large inland lake IJsselmeer. The southern section covers Amsterdam, from the IJsselmeer down to the rivers and delta of the Scheldt river bordering Belgium, near the North Sea coast. 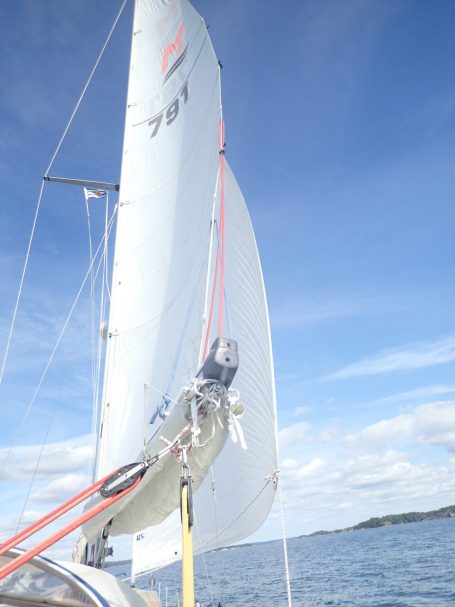 Time to start planning for the season’s repairs and renovations. In a few weeks the spring fixing starts. Not much to do this time, Isabell is in good shape. During winter the batteries are loading from a small 25W solar panel that sits in the mast above the tarpaulin cover.
It helps to look through old notes and pictures of last season’s sailing. Time also to buy new spares to the engine, such as oil filter, fuel filter, impeller and zinc anodes. Some of the sheets have to be replaced and the electronics checked. Now, let’s hope winter does not come back in April, like it did last year.

S/Y Isabell is a 1980-built Hallberg Rassy Monsun. Since the fall of 2008, after the captain bought her, many nautical miles of sailing fun have been covered. The first long trip was in the summer of 2012, when we sailed Isabell as far north as possible in the Baltic Sea, and then back to Stockholm. To celebrate the 40th anniversary of this splendid yacht, a trip from Stockholm to The Netherlands is planned for the summer of 2020. Is it going to happen? Follow us on this blog if you wish to know.